Vincent Du Bois prints his ideas in the material 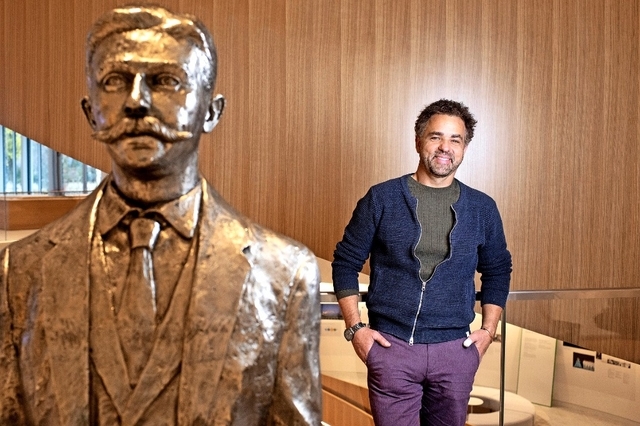 Vincent Du Bois poses with his bronze and silver Coubertin in the heart of the Olympic House in Lausanne.

Reconciling the hand and the head, marrying ancestral know-how with contemporary practice, putting concrete and digital universes in conversation: everything is a matter of crossroads for Vincent Du Bois. The visitor can see this as soon as he enters the gate of his stone kingdom on the chemin du cimetière in Lancy, opposite the landscape of graves and greenery of Saint-Georges. On the path leading to the Geneva-based sculptor’s studio, piles of mortuary slabs stand alongside august white marble figures or installations with resolutely contemporary mirrors and metals. The artist has made his territory out of this joyful mineral mess that was once the daily life of the family stone carving business.

It is probably his astonishing capacity to knit links between forms, techniques and centuries, without worrying about any dogma, that earned Vincent Du Bois the right to create the statue of Baron Pierre de Coubertin. The International Olympic Committee (IOC) wanted to mark the 125th anniversary of its creation. The portrait of the founder of modern Olympism is 1.74 meters high and is displayed in the new Olympic House, inaugurated last June in Lausanne.

The value of the creative gesture

For this project, the winner of the competition started with a very traditional execution: modeling the character in clay, according to period photos. While many contemporary statuaries have abandoned the shaping of materials in favor of digital scanning, Vincent Du Bois stubbornly defends the value of the creative gesture. “The idea must be worked in the material. Our Western cultures have always established a hierarchy between the hand and the head, which makes us distance ourselves from know-how. And the power of digital technology often reinforces this phenomenon.” The sculptor sought to draw a “psychological portrait” of the baron, represented in the strength of his 40 years. “I found it interesting to trace the character in his intentions, at the forefront in the areas of sustainable development and equality between genders and peoples.”

Digital tools only come into play at a later stage. The clay figure was converted to 3D, then duplicated in polystyrene before being meticulously machined in a foundry. Developed by Swiss Art Edition in Geneva, the alloy of bronze and silver used for its manufacture gives a great luminosity to the sculpture, which has been carefully polished. The spectator is reflected in it as in a mirror,” says Vincent Du Bois. This image allows a meeting between the past and the present and indicates that the permanence of Pierre de Coubertin’s ideas in the here and now prevails over the resemblance of the statue to its model.” In addition, this sparkling effect echoes the clarity of the building, designed to meet the highest international standards for sustainability.

The only regret of the artist? That the IOC did not follow him to the end. In its final design, the work appeared cut into layers. “It would have been composed of as many voids as solids. The physical absence of the subject was part of the concept. The closer we got, the more he would have faded away.” A proposal that was probably too bold in the eyes of the client, who preferred a more consensual approach.

Capturing the poetry of the world

However, this work was a renewed opportunity for its creator to make his voice heard. For there are two reasons for art according to Du Bois. To try to capture the poetry of the world by “trying to lift a corner of the veil on its mystery”, first; to express oneself, then, “as a citizen, with a critical sense on the society”. “Making this piece allowed me to defend the skill of portraiture via contemporary art. And on paper, one can only defend Coubertin’s humanistic vision, even if it seems subject to question today.”

His voice, the sculptor makes it resound in many other places. In the galleries, where he regularly exhibits, as well as in the public space, with numerous installations – we owe him notably “Adam and Eve”, two monumental marble pieces that face each other on the Grand-Saconnex square. The man who has always, in parallel, pursued his work as a craftsman, feels as much at home on the roof of the Museum of Art and History restoring ancient statues as he does at the heart of the dialogue between virtuality and concreteness at the Interfaculty Center for Affective Sciences of the University of Geneva, with which he has a contract as “artist in lab”. In 2016, he was seen in the Kings’ Cemetery, piloting the exhibition “Open End”, supported by the City of Geneva and bringing together 16 artists – a second part is in preparation, which will begin with a workshop at HEAD on immortality and the cemetery of tomorrow, next February. Dedicated to his first passion, drawing, Vincent Du Bois seems to take pleasure in not giving in to all fashions. The best way, without a doubt, to offer yourself freedom.

<< Back to the press